Most people relate Aquarius to freedom, but what does that really mean? Freedom is a funny and fickle thing. Like most concepts or ideals, it is also incredibly vast in translation and probably every person you would ask to define it would say slightly different or very different, things. I know that I used to think it meant I had the ability to do whatever I wanted, whenever I wanted! Turns out, that kind of freedom, what I now call material freedom, was a lot of work… if I wanted the freedom to eat whatever I wanted, then I had to be able to buy it and also exercise later. If I wanted to go wherever I wanted, then I needed transportation and funding. With each “freedom” I desired, came a responsibility to sustain that choice. And sometimes, the work did not weigh equal to the reward.

In most spiritual traditions, such as yoga, Hinduism, Jainism or Buddhism, freedom and liberation are goals that mean one has attained either oneness with God, thereby dissolving all ego and attachment; or one has freed themselves from the cycles of karma and is now liberated from that construct. Ultimately, it is about the soul and releasing the suffering that comes with a life of duality and desire. Rather than having “more” on a physical level, one seeks to have less to then have “more” in the spiritual. There is still responsibility in this choice, and renunciation or holding out for a spiritual goal is rather challenging work!

It is interesting to meditate on this pulsation of freedom/liberation, and it is this very dance that I am trying to stay focused on as the blue moon, or the second full moon of July, waxes to her climax.

Adding to the uniqueness of this lunation is the newly retrograde movement of Venus, who has begun her descent through the underworld, something she only does every year-and-a-half, so also, uncommon like the double full moon. In this journey, she leaves her role as evening star and is reborn as the morning star.

Much myth relates to her transformation and I have read beautiful comparisons to the journeys of Persephone and Innana, both of which involve earth goddesses who surrender all to enter the lower realms. Through sacred events and intervention, they are allowed the rare privilege of coming back to earth, reborn and more powerful than before. The core of this power relates to surrender, and Innana journeys through seven gates of hell on the way down and up, leaving a particular power behind each step.

Again, my mind turns to spiritual liberation. The goddesses gain true power when they lose all that they thought they knew and who they thought they were. Even as they re-gain their physical stature, they are no longer defined by the material realm.

Aquarius approves of this kind of bid for freedom. Ruled by Uranus, called the “great liberator,” and symbolic of lightning, it frees us from ego and old constructs in the blink of an eye. Aquarius is fixed air, the high mind and universal consciousness. She seeks to go beyond the daily drama of Gemini or the harmonious alignment of Libra and goes straight for true enlightenment. Whatever that means.

My trouble with Aquarius is that I can get so caught up in the existentialism of it all… freedom and liberation.. materialism and spirituality… renunciation and restoration. But the bidding of Venus to descend, tells me I am best not left in my head on this full moon. No, the best place to find the freedom I seek is within.

There is a mystery to Venus and to Aquarius. Something so old and ancient and part of a consciousness we humans have somehow disconnected from. Perhaps, this weekend, under the light of the beautiful blue moon, with the energetic pull down into the lower worlds, we can drop into some form of the truth.

As they say, the truth will set you free.

So, ask. Ask your heart, the moon, the stars, the trees and the sea. Ask the animals that peek out under the luminous lunar gaze. Ask your guides and guardians. Ask your inner eye. Ask where you are not in your truth and where you are not free. What are you afraid to surrender on your journey through the night? What do you cling to and does it serve you? What would life look like if you were really and truly free?

This is a perfect moment to seek. July opened with a full moon and it closes with one. In between we experienced American Independence day and a plethora of events, in skies and on earth, that made us wonder what freedom means to us…people gained rights. Others lost them. Inequality was spotlighted as still a very real and present thing. The world undulates with scientific marvels and basic tragedies. We are at the climax of a pivotal year, sitting right at the top, under the rare blue moon. What do you have to lose? What can you gain by letting go?

I pray for the highest vibrations through this cycle. I pray that we seek freedom from the bondage that disconnects us as united beings on this precious planet. I pray for liberation from addiction, attachment and suffering and the strength to be of service to truth, peace, and my fellow beings. I pray for the children and the old ones. I pray for all to rise up and recognize what it can mean to be free. I pray for the safe return of the Goddess from her descent and that as she emerges, we can recognize her in all things. 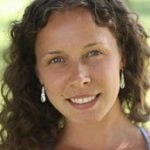 Bekah Finch Turner is also a regular contributor to chakraboosters.com, home of Chakra Boosters Healing Tattoos™. She is a yoga teacher, shamanic practitioner and moon devotee. For more information on her work and writing please visit www.sacredwayyoga.com.